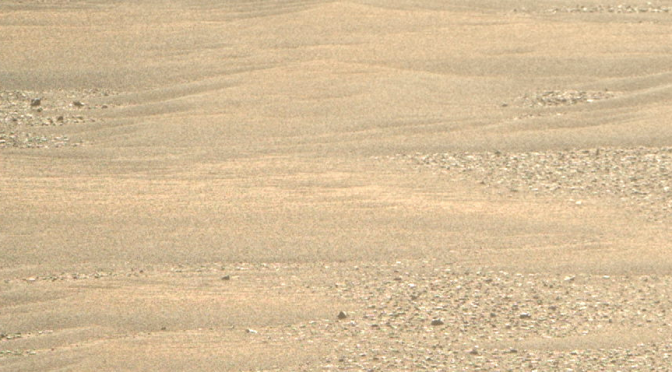 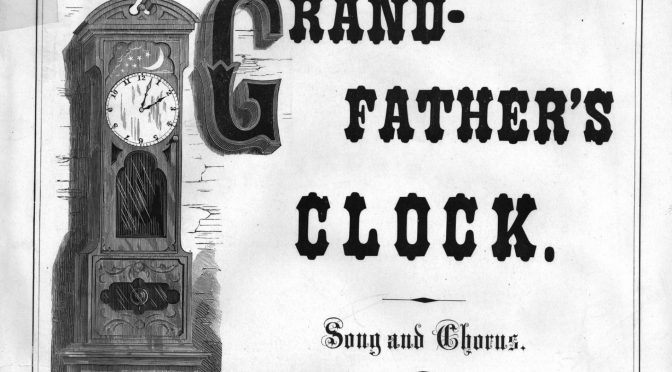 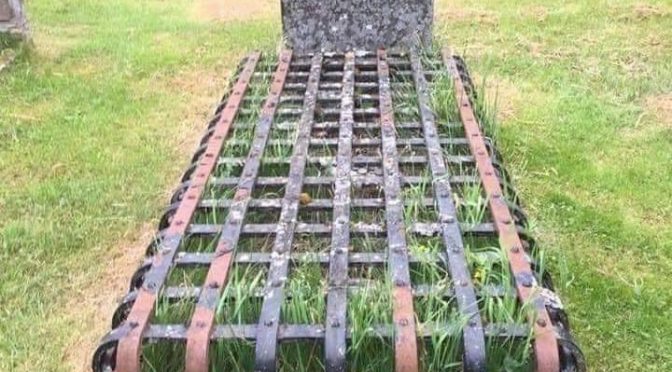 A friend posted a most unusual photo on Facebook today: it’s a gravesite in a cemetery, but in front of the headstone, there’s an iron “cage” of sorts. The cage is sunken into the ground on all sides, and through the iron straps, you can see where grass has been growing, protected from mowing for many years.

Accompanying the photo is the caption, “I’d like to know the back story….”

I very much wanted to make a joke about it being the burial site of a vampire, zombie, or other undead creature, but I was curious and started googling.

This appears to be a mortsafe. Basically, a cage intended to make it difficult for anyone who might try to disturb the grave (apparently there was a lively trade in corpses for sale to medical schools). Normally, they were only left in place for six to eight weeks until the body had decomposed and would no longer be in a state to be saleable. This one appears to have been left longer.

Probably because that’s where they buried a vampire, zombie, or other undead creature. 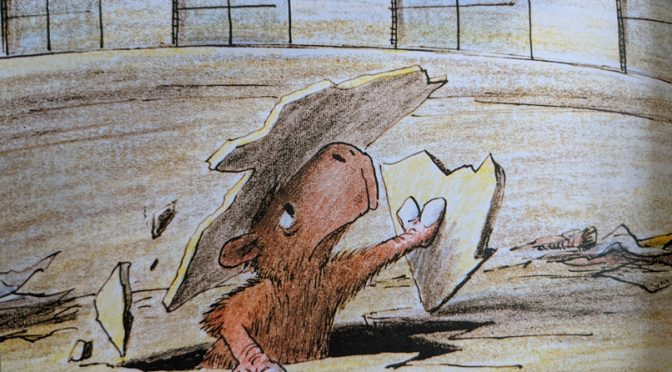 The Lorax is probably the first book that comes to mind when people talk about children’s books which touch on environmentalism and preserving nature for future generations. And I have no complaint with that. Doctor Seuss (aka Theodor Geisel) wrote a powerful story, which connected with kids quite well.

But for me, I also remember The Wump World. I couldn’t have been much past first grade when I first read the tale of these gentle creatures and how their world was overrun. I can’t be certain, but this was likely also one of my first introductions to the science fiction genre as the Pollutians came to the Wump World in what were clearly spaceships.

Out of the blue, a friend recently asked if I’d ever heard of the wumps and after checking that we were talking about the same thing, I felt compelled to revisit the Wump World.

Although the book is 44 pages long, it’s worth noting that every page is also illustrated with a color, pencil-drawing. It’s a fast read for an adult and given that it’s stuck with me for more years than I wish to recount, it seems a reasonable kid-length.

The story tells of the Wumps and how their idyllic existence is one day interrupted by the arrival of “The Pollutians” (to an adult, the name is hardly subtle, but as a child, I scarcely noticed it). It’s a dismal life for the Wumps, but much as with The Lorax, there’s a hopeful ending.

So yes, get the kids hooked on The Lorax, but don’t forget to visit The Wump World too. 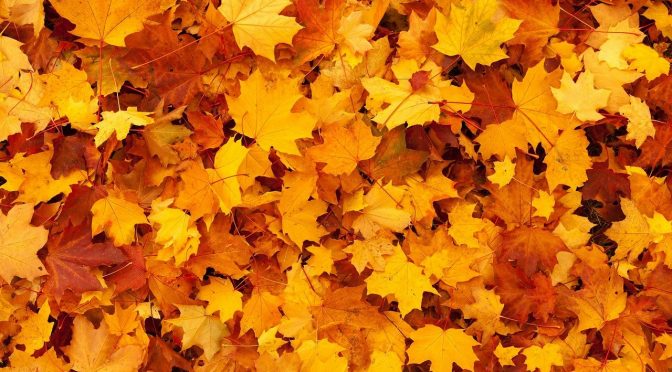 On Twitter, Dylan Beattie pointed out that Disney’s ownership of Deadpool, along with Star Wars, Mary Poppins, and other properties opens the door to a variety of beloved characters appearing in the next Deadpool movie.

Also, can we have a bit in the next Deadpool movie where Deadpool figures out that Disney now own the IP to so many franchised characters that legally there’s no reason he can’t rope in Wolverine, Chewbacca and Mary Poppins for the big showdown in the final reel?

So… here’s the premise for #Deadpool3….

Deadpool 2 starts off with Wade and Vanessa deciding to start a family. The new movie takes place perhaps eight years later; they have two kids, a boy and a girl, and they realize, they need to hire a nanny. And it’s Mary Poppins.

The overall plot is still hazy, but a few highlights spring to mind… The “Mary is cruder/more violent than Wade” twists are too obvious. But mid-movie, the entire cast breaks into a musical number? That’s got potential.

I’m picturing a general melee with both sides fighting, and singing at the same time. In the midst of this mayhem, Poppins moves around in her usual “practically perfect” calm and collected way, moving fragile items moments before a body flies through that spot.

In the middle of the fight, Deadpool picks up a priceless vase to hit someone over the head.

The music halts as Poppins glances sharply at him.

Deadpool puts the vase down and shoots/decapitates the thug instead.

“Much better. Carry on.”

The music and singing resumes.

At the end of the song, Deadpool addresses the camera.

“I know what you’re thinking. How can we have a Mary Poppins scene without a Dick Van Dyke cameo? It’s like he wouldn’t return my calls.”

Dick Van Dyke is in the background, waving to the audience, a finger on his lips.