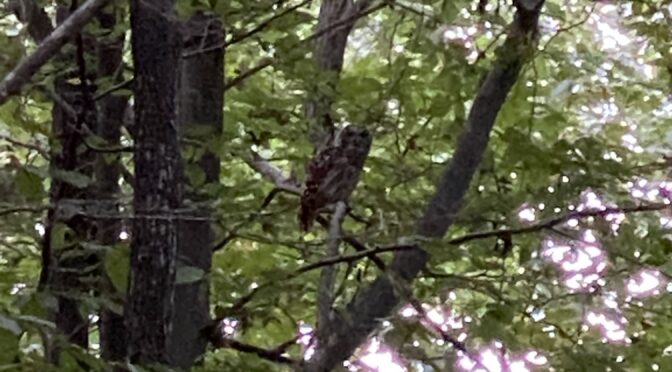 Sunday’s forecast calls for rain, so when I was about to leave to run errands this afternoon, I decided I should take Sweet Potato with me and head up Black Hills Park in Boyds. That way, even if she can’t run around the yard tomorrow, at least she’d at least have been able to spend a few hours outdoors this weekend.

We usually follow the path around the park’s main loop, that’s good for three miles and, depending on how much time she spends sniffing, is generally something we can complete in about an hour.

About a third of the way through the walk, I heard a sort of “whooping” sound, so loud that I thought it might be a human trying to imitate a bird call. About 15 seconds later, I heard a similar call in the distance. The calls repeated periodically and realizing it might just be the first time I’ve ever heard an owl in the wild, I quickly recorded the video below. There’s really not much to see in the video, but you can hear the hooting.

Looking toward the apparent source of the sound, I spotted “something” in a tree. Maybe a bird, maybe a squirrel’s nest. I cranked the phone’s digital zoom to the max (I really need to carry something with better optical zoom on these trips) and took a photo of what I’m told is a barred owl.

I made one more attempt at recording audio and if you carefully watch the middle-right section of the video, you can see the owl flying off, presumably to find the other owl.