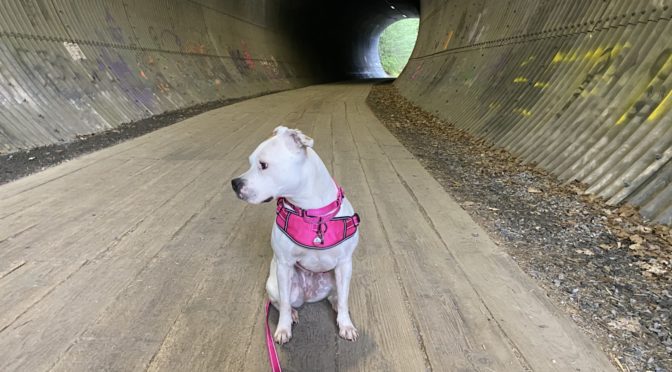 Not having any specific schedule for the day, we slept in a bit today. Breakfast was at the hotel (Sweet Potato scored a couple pieces of bacon) and were on the road to Vermont at 10:30.

The drive was largely uneventful, with rain most of the way.

At quarter after two in the afternoon, we arrived in Vermont.

The first stop in Vermont was in Bennington. I didn’t really have a strong reason for stopping here, except that my brother’s family used to live here, but no longer knowing their former address, I settled for sending them a photo of the Bennington Battle Monument.

The monument is in honor of the 1400 men from New Hampshire, led by General John Stark, who came to Bennington in August of 1777 to help defend the newly created state of Vermont. As you can see, Sweet Potato was overwhelmed with awe and preferred to look up at General Stark’s statue rather than pose for any silly photo op.

We arrived in St. Johnsbury around quarter to six. The temperature was close to 30 degrees cooler than Binghamton just a day earlier, and given the clouds and chance of rain, the decision was made to hold off on going to Dog Mountain until Thursday.

Between the late start and long day in the car, Sweet Potato wasn’t ready for dinner yet, and honestly, neither was I. So based on another local recommendation, we went to the trailhead for the Lamoille Valley Rail Trail. I’m told this will eventually cross the state, but for now it only goes from St. Johnsbury to West Danville. We only really had time to go in a mile and a half, perhaps two, but it was pretty.

As with the Westmoreland Heritage Trail on Tuesday, this was built on the land from a former railroad right of way. From the width of the tunnels, as well as the clear spaces, my assumption is this was a single track with some sort of schedule so trains would only travel one direction at a time.

One of the things I found interesting was that the rail trail ran right up against people’s backyards. In these cases, there was usually a pathway cut into the hillside to make it easier to get to the trail. One enterprising home owner used the location to advertise a landscape business

There was a lot of lush plant growth along the trail