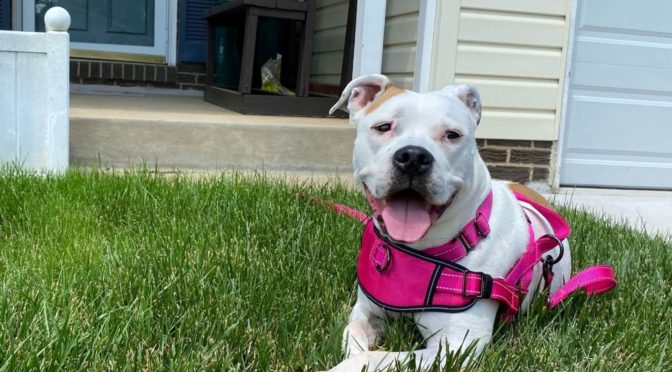 I’m taking Sweet Potato on a trip to visit Dog Mountain, in Saint Johnsbury, Vermont. Stephen Huneck was an artist who created art (mostly in wood cuttings) which featured dogs. When he passed away, he specified in his will that his estate should be used to create a public dog park (150 acres!) where anyone can bring their dog.

Why am I taking my dog to Vermont to go to a dog park? Two reasons really. First off, if you had a dog, and wanted to take a brief vacation, why wouldn’t you go to a place named Dog Mountain? Second, and perhaps more importantly, Sweet Potato spends a lot of her time waiting for humans to be done with work, this is an opportunity to let her “dog it up” and have some stories to share with her friends in her old age.

Today’s leg of the trip took me to Level Green to wish Mom a Happy Birthday in person.

While I was there, I took Sweet Potato for a walk along the Westmoreland Heritage Trail, which is built on the former right-of-way for the Turtle Creek railroad.

Growing up, I always somewhat assumed Saunders Station Road was named for a train station, but the above sign is the first actual confirmation I’ve had.

Aside from running across a couple flatbed cars which derailed near the Saunders Station Road crossing, I never saw a train on those tracks. (Now that they’ve been replaced by a bike path, the odds are I never will.)

Sweet Potato and I walked in a North-Easterly direction toward Murrysville. We were somewhat time constrained and only walked about a mile out, but there were still things worth seeing.

Less than a quarter mile from the road, the Heritage Trail crosses underneath the Pennsylvania Turnpike. Unsurprisingly, there’s a lot of graffiti. What surprised me was that not all of it was random tagging. I suspect the pop-culture images (e.g. Dexter and Homer) may be something that was done for the Heritage Trail project, but I’m not entirely certain.

Then there’s this one. I recognize “Squidward” as a reference to Sponge Bob Squarepants. But “Squidward Tortellini” seems an odd thing to scratch into a railing.

I’ve driven past this house on Abers Creek Road any number of times. I just knew it looked like it was made of stone. I had no idea of its historical significance, nor that it was called “Valley Tower” until I ran across this sign.